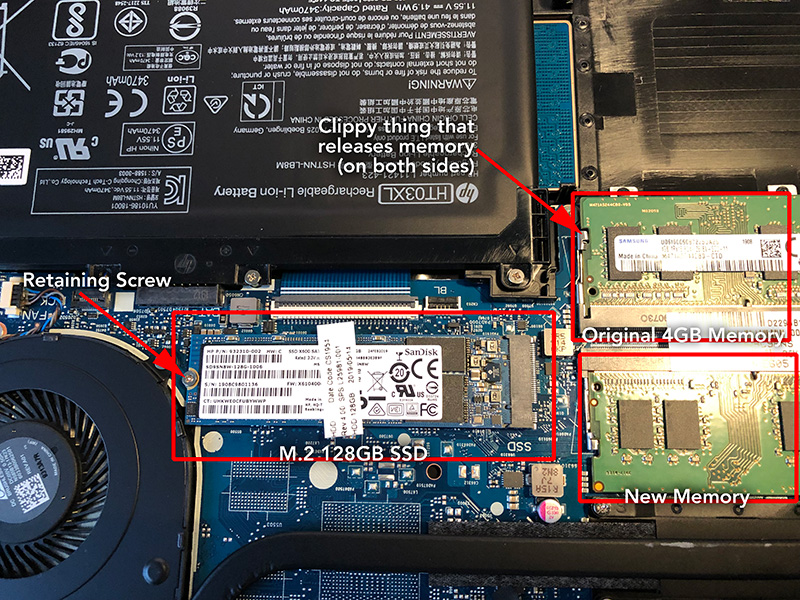 If you’re interested in upgrading the SSD on an HP 14-cf0006dx laptopUpgrading Storage / Hard Drive on an HP 14-cf0006dx laptop there are two options.  The path of least resistance is replacing the SSD (Solid State Disk) module that’s on the motherboard (see photo) below. This bad boy is called an M.2 SSD or a “gumstick” (NAND NVMe PCIe M.2 SSD). It’s easy peasy to replace.

I can’t recommend a specific model of M.2. It depends on your budget. And not all are equally speedy—speed can vary by double. But the performance or any SSD can unleash your processor from another key bottleneck—lack of drive space. See my upcoming post on why you should buy a cheap PC and upgrade. Or better yet, upgrade your existing PC.

The M.2 SSD “gumstick” plugs into a PCIe slot on the motherboard. Discharge electricity, unscrew the little retaining screw, pull the old one out and plug the new one in, replace the screw.

Another option that the video points out is adding a standard 2.5” drive, preferably an SSD if you want your laptop to be responsive and speedy. There’s a clearly open space near the upper right corner of the open unit where a drive would fit perfectly. You’ll have to figure out how to hold it in place however since there is no mounting hardware. AND you have to find a cable that adapts the connector on the drive to the PCIe connector where the M.2 “gumstick” plugs in.  As of this writing I don’t think such a beast exists.